The Passing of Sergio

Christine and I are saddened by the passing of Sergio Oliva.  My fondest memory of the ‘Myth’ is the 1967 IFBB Mr. Universe in Montreal.  I flew up from Florida to compete and along with other competitors was dropped off at the Paul Sauve arena (a wresting auditorium if I remember right).  The contest was being held here and all the competitors were accomodated in a large gym upstars sleeping on cots.  As the competitors arrived and claimed their cot, the place began filling up.  Rick Wayne was there, he’d probably win, I thought, but then heard that Sergio was on his way.
He arrived late  in the evening, clad in bright red blazer, to find no cot available.  But as soon as everyone realized Sergio was here one contestant gave Sergio his cot and slept on the floor.  Sergio won and after the contest I went out to eat with him (All the guys ate at a little restaurant across the street).  We each had a whole chicken and during the meal Sergio confided in me “You will win in future because you know how to do.”  He meant posing and I took his advice seriously, trained hard and won the title the following year.  Sergio was there too Miami 1968, looking fantastic and gave a posing exhibition.   Here are some photos taken by Christine 16 years later at Sergio’s last competition 1984 Mr. Olympia.
Rest in Peace Great Champion, 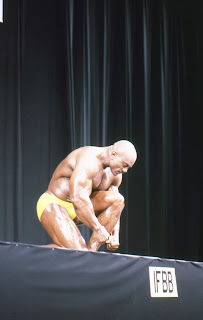